Our music video for Bring Me Sunshine has taken us around the world. After we released it in 2011, it became an instant hit being shared tens of thousands of times on social media and winning seven film festival awards including the prestigious Silver Telly Award, the highest distinction they offer.

We set out to make a video that people could relate to in terms of the economic, societal and general problems of life but we wanted to show people that they can do something about it and generate their own happiness and well-being.

The stories we have received over the last couple of years and continue to receive from people being inspired to turn their lives around and take control in small and large ways have been overwhelming and more than we ever expected.

It's also available in other MP3 download stores such as 7Digital, HMV, Amazon etc so just search in your favourite one if you prefer.

We also have a three track CD single which includes both the video version of the song as well as the extended album version featuring Toni Elizabeth Prima as well as a brand new Jive Aces original tune called "King of Jive" which is a tribute to Louis Prima and the Bring Me Sunshine music video as an enhanced CD (to play in your computer) all for just £3. To buy a copy of the CD

Help spread the sunshine and share the video with your friends by email or social media. 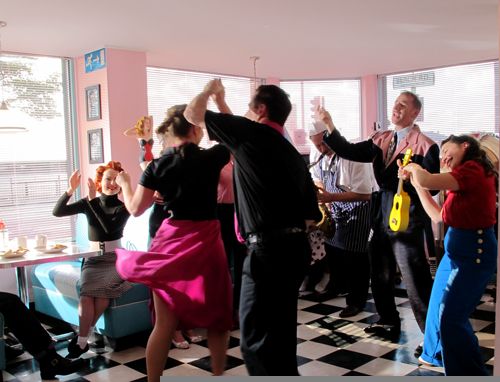